Difference between revisions of "DKC2 Tricks"

Damage Boosting is an important part of speedrunning DKC2 as it allows you to skip various sections of many different levels.

Whenever you have two Kongs out and one of them is hit, the next Kong will instantly jump no matter what once you gain control. We can utilize this jump to skip sections in many levels.

Similar to the Kong Damage Boost, we can also utilize damage from animals to either skip sections or go faster through other parts of the game. The main difference between Animal Damage Boosting and Kong Damage Boosting is that once your animal has taken damage, it is up to the player time the jump by pressing B. The animal will not instantly jump without any inputs once the player has regained control. This can be challenging for new players as timing the damage boost jumps in Web Woods can be difficult. It is also worth noting that the timing to jump for some animals is more lenient than others. For example, Damage Boost jumping with Rattly is much easier than Squitter as the timing window to press B after receiving damage with Squitter is much tighter than with Rattly.

By running towards a goal and pressing the select button as you run onto it, you can beat the level and start the next level with the opposite Kong. This is especially useful for Gangplank Galleon and Crocodile Cauldron, because an extra jump is not needed to hit the target. It is also useful for switching Kongs in preparation for the next level since you can save the time required to swap in the next level (Useful for boss fights since Dixie's rap is shorter than Diddy's). This trick does not work on all levels for unknown reasons.

The invisible barrel in DKC2 might be one of the most important glitches in the game, allowing you to skip entire levels in seconds. The idea behind the glitch is that by holding an item that no longer exists, we are able to corrupt memory. On a more technical level, every object that is loaded into memory is stored at some address. However, by obtaining an invisible barrel, that object that we once held (beetle, DK barrel) is unloaded, but we are able to still carry it in Diddy/Dixie's hands. By loading a new object at that same memory address and throwing the invisible barrel, we are able to corrupt the value of memory at that address, resulting in a huge array of glitches, including moving objects/enemies, changing a barrel's exit point allowing you to Wrong Warp, to even breaking a real SNES console as seen in Castle Crush.

Diddy Clashing: The hardest method of clashing and obtaining the invisible barrel. Diddy clashing requires precise timing and the timing window is much smaller compared to Dixie's clash. To do Diddy's clash, jump onto a beetle and hold it (holding Y). Go to another beetle and face away from it such that it is walking closer to Diddy's tail. Now for the hardest part of the trick, you must release Y and press and hold it quickly again right when the beetle is close to the beginning of Diddy's tail. If you are successful, then Diddy will "hop up" and the other beetle will have taken damage. All thats required at this point is to run into the beetle that you have clashed with, and the invisible barrel is yours. If you attempt this method for clashing and Diddy throws the beetle, then you were too fast on releasing and re-pressing Y. If Diddy gets hurt during this clash, then you were too slow. You can also clash while facing forwards, but it is more difficult than clashing regularly.

Dixie Clashing: A much easier and recommended method of clashing for new players. The timing window for releasing and re-holding Y is much more lenient compared to Diddy's method. To do Dixie's clash, jump onto a beetle and grab it (holding Y). Go to another beetle and face towards it. Once the beetle is "somewhat" close to you, release Y and re-press and hold it. If successful, Dixie will hop backwards, and the other beetle will fall down. All that's left is to run into the beetle and the invisible barrel is yours.

In many circumstances, we want to be able to control the timing of when enemies are loaded due to timing purposes. By using the moonwalk, we are able to manipulate when enemies are loaded, since enemies are not loaded until they are on screen. There are two techniques of accomplishing this as seen in the above video: ducking for moonwalk and duckless. By ducking and holding down right (in respect to the video), the camera shifts more towards the right side of the level, delaying the load the of bees on the vines. We can also accomplish the same thing by taping right to force the camera to quickly focus right and then hold left (duckless method). Without this technique, we would either have to lose a Kong jumping over the bees or wait a full cycle for the bees to drop down.

Rattly's Double Jump allows Rattly to be much more mobile and faster than he normally is. However, the techniques used for his double jump require high execution and frame precise inputs. The basic idea you want to understand with the double jump is getting rattly to charge while jumping, doing so allows you jump again. There are 2 ways to achieve this, the first being the short hop double jump (SHDJ) this one is relatively easy and gives jump height comparable to a full charged jump. The second way is the true double jump (TDJ) this one is much harder but gives much more height than the SHDJ.

The SHDJ requires that you hold A then tap B. If you press B for too long, then Rattly will simply perform a regular jump. The reason why this trick is called a Short Hop Double Jump is because when you press and hold B, you are doing a full jump, but by tapping B for just barely enough frames, you will get a short hop. Doing this correctly will make rattly charge while jumping. The next step is to release A and jump. Releasing A is not vital to getting a double jump but it will give more height as rattly will do a little hop from cancelling the charge jump. Holding B any further results in a bigger jump.

The TDJ requires that you hold A+B at a certain time before rattly lands from a jump. Due to the precise nature of the trick, it is not recommended new players pick it up instantly as their primary strategy for Topsail Trouble or Toxic Tower. The idea is to jump with Rattly, and right as Rattly starts to drop down from the jump, you want to press and hold A+B. If successful, Rattly will do a charged jump on land, allowing you to input another jump to reach even greater heights! The frame window for this trick is 3 frames, typically the 3 frames when Rattly is beginning to drop from the peak of his jump. If Rattly doesn't perform a unique/awkward jump on land, then there are two things that possibly went wrong:

It is also important to note that to do a TDJ, you don't have to always start off with a full jump. It is possible to TDJ off of any jump of any height, but the input is very very strict! 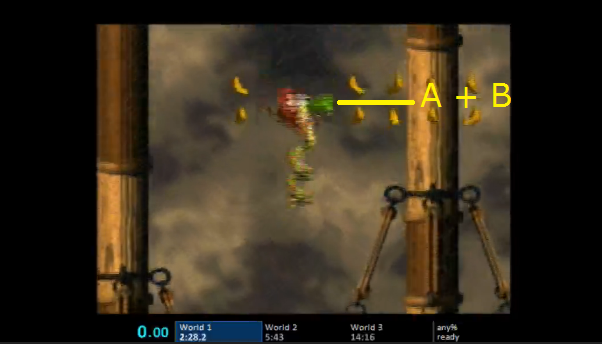 One easy (easier) way to practice the TDJ timing is to simply start off in Topsail Trouble with Rattly, do a full jump, and press A+B right as Rattly's nose is between the bananas. If successful, then Rattly will perform an awkward hop on land. The standard rules for TDJ still applies: if you input too late, then you will jump on landing. If you input too early, then you will charge on land.

The Omega Double Jump is a version of the True Double Jump that gives even more height, it requires you to hold Y in addition to A+B like the TDJ. Once you get the jump while charging you need to move left or right and release A. Releasing A will make Rattly hop you want to jump at the height of the hop to maximize height. We want to repress A+B while holding Y to attain the max jump off the double jump. As a reference: Y+A+B (get the DJ), release A (Rattly hop), A+B (jump, also: we never release Y).

When releasing charge with Rambi and jumping, you can double jump, allowing Rambi to reach even greater distances. To perform this trick, simply repress B while in the air, and then tap the opposite direction you're going, then forward again. You will want to continue holding right after you tap left if you want to maximize your distance.

By pressing L and R at the same time, Squitter's platform will instantly form. This is particularly useful for traveling up vertical distances very quickly. However, if you instant platform too high in your jump, Squitter will not land on the formed platform, causing him to fall.

Team Throw Super Jumps allow you to reach areas that normal team throw jumps cannot. They can be used to skip sections of levels or just to reach certain areas faster. The timing for Team Throw Super Jumps are a bit tight, but definitely feasible for new players to learn with practice. To perform one, simply press A to team-up (i.e., Diddy holding Dixie). Next, throw your Kong at an enemy. Now, when your Kong is traveling back to you from hitting the enemy, press and hold B. You will attain a much higher height than you previously would be able to. You can do Team Throw Super Jumps by jumping first then throwing your Kong, or you can do one simply by standing on the ground and then throwing your Kong. This trick can also be performed with either Kong out (Diddy or Dixie doing the throw). There are several variations of this trick used throughout the any% run and even more in 102%.

Team up goals require that you press B then 2 frames later press A this causes you to both jump and team up stopping all vertical height allowing you to hit the goal early like a goal swap but keep the current Kong active. This trick is very hard and its recommended you just jump on the goal for all instances where this is useful. This trick is often referred to as a "plink."

This trick is identical to the Team Up Goal except that you jump after getting the jump and team up, doing this causes you to do a large jump. This is even harder than the Team Up Goal and is not recommended at all.

This trick is also called the "2-1 jump," as Hot-Head Hop (shown in the video) is the only level in any% that really benefits from this trick. It is also a 2 frame team up into a 1 frame jump. Shoutouts to newpants for revolutionizing the DKC2 game.

By throwing an Invisible Barrel, one can manipulate memory in such a way that the warp barrels don't know where to put the Kongs once launched. This will typically put you back to the stage select screen with the level completed. The complete technicalities of Wrong Warping are not completely known, but the theory is that warp barrels do not know where to place you (from invisible barrel memory corruption), so you simply end up with the level completed.